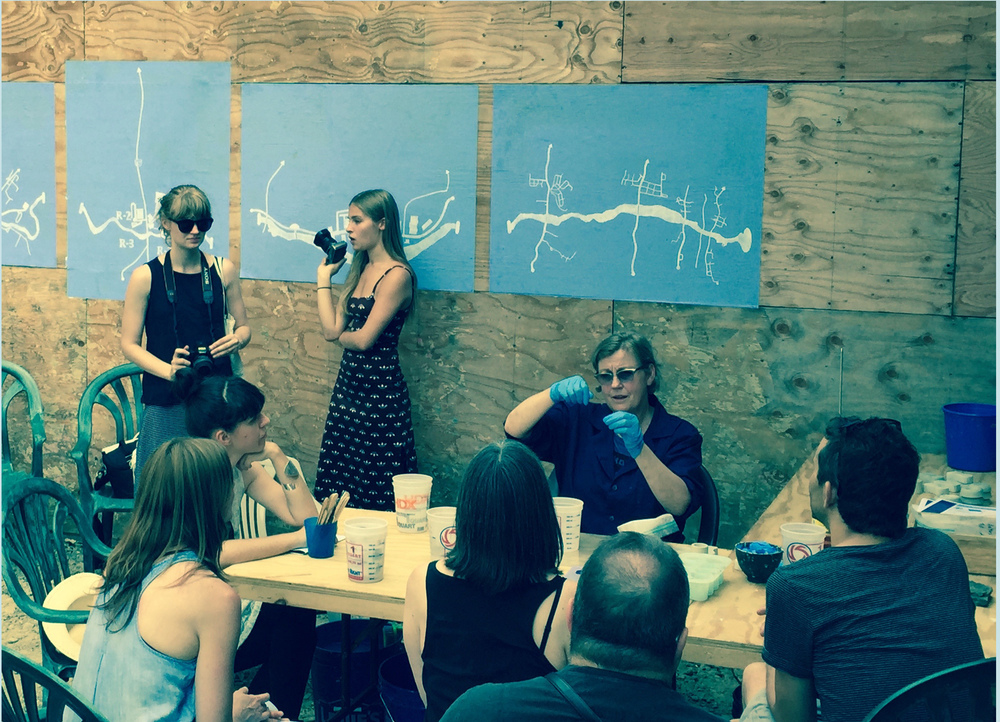 Regional Planning Labs
by Lizz Thabet
My subject matter is cities - where urban planning and architecture become public art. I’m always coming back to, by investigating through art, the built environment which creates social space. Barbara Westermann
Barbara, a recent resident at the Women’s Studio Workshop in Rosendale, New York, points to a dimly-lit photograph on her computer screen. An array of cement bricks lies on a table, illuminated by harsh light of a camera flash, in what looks like a basement.
“These are what they call ‘test briquettes,’” Barbara says, explaining how engineers would pour cement into these sponge-shaped molds to test the material’s strength. “This little thing was the standard of quality, and the whole livelihood of Rosendale was in there. When you think about how complex built architecture is - sometimes what runs it is very simple.”
Barbara hangs another picture of three glowing, blue letters: R P X - short for Regional Planning Lab: Under Construction, her two-part work for the August art festival, Women’s Studio Workshop’s inaugural program of video, installation, and performance art. RPL’s subject is Rosendale, whose industrial past as a cement mining town places it in unique relationship to urban infrastructure and modern architecture.
Barbara’s research-driven methodology uses digital maps and historical documents with a utilitarian (dis)regard for aesthetics and materials. She brings the visual vocabulary of urban planning and architecture to works of sculpture, public art, and printmaking.
As an artist, she acts as a liaison between these data-driven fields and the public; she makes highly complex systems tangible through visual, non-technical language in a way that’s both informative and empowering for participants.
Regional Planning Lab considers the rural landscape of Rosendale in symbiotic relationship to its dense metropolitan sister, New York City,
and addresses the intricate structures that physically, socially, and politically compose environments. Her five-week public art residency culminated in a mural on Women’s Studio Workshop’s construction site and in two community workshops that invite the public to learn about and cast cement.
“I’m seeing it as a beautiful coming-together,” she says. “The cement comes from here; it has a history, and it’s connected through the river. For me, coming here is like a spiral.” Barbara has been casting concrete objects for decades. As a sculptor visiting this former cement town, she pays homage to the utilitarian material that has been foundational to her work for so long.
Through aerial views, her mural follows the Hudson River and Rondout Creek - a tributary of the river that runs directly through Rosendale - from the village down to New York. Barbara calls the Hudson Valley a “green lung,” the parks and other forested areas which surround urban environments. “What interests me in architecture and cities is that they provide a boundary and a protection around nature. It’s like skin: it’s like the thin layer that holds everything together,” she says.
She traces Google maps on vellum to scan, invert, enlarge, and tint them to resemble blueprints, which will be wheat-pasted on a plywood wall at a construction site. Together, the panels “zoom out” on the landscape to reveal both places situated within complex matrices of intricate data, illustrating the flow of cultural exchange and commerce.
The installation creates a backdrop for Barbara’s community workshops, designed to situate Rosendale’s elusive industrial past within our domestic present. Barbara invites the public to cast everyday objects in cement and learn about its history, techniques, and mold making. Spoons, water bottles, baking molds, letters, and even test briquettes will be available for casting, inviting participants to create “concrete poetry” with a cement alphabet.
Barbara is a sculptor and installation artist. Her sculptures, prints, and drawings are minimalist and conceptual, with an emphasis on social sculpture, urban planning, geometry, geophysical mapping, and music. She utilizes site-specific work that involves sculpture, prints, architecture, and engineering, and uses sculpture to ‘embody’ utilitarian objects.
Regional Planning Lab explores labyrinthian relationships between history, landscape, and cities through what’s tangible and relatable - like the small test briquette, the foundation of cement’s history. It creates a space for exchange and invites consideration of our environment. Barbara writes, “Sculptors, like poets, deal in the concrete - in this case the play on words is apt, as we revisit a concrete past through art practice, celebrating cement, as it was made in Rosendale.”
Lizz Thabet is an artist and software developer with experience in digital publishing, database design, and networked visual cult