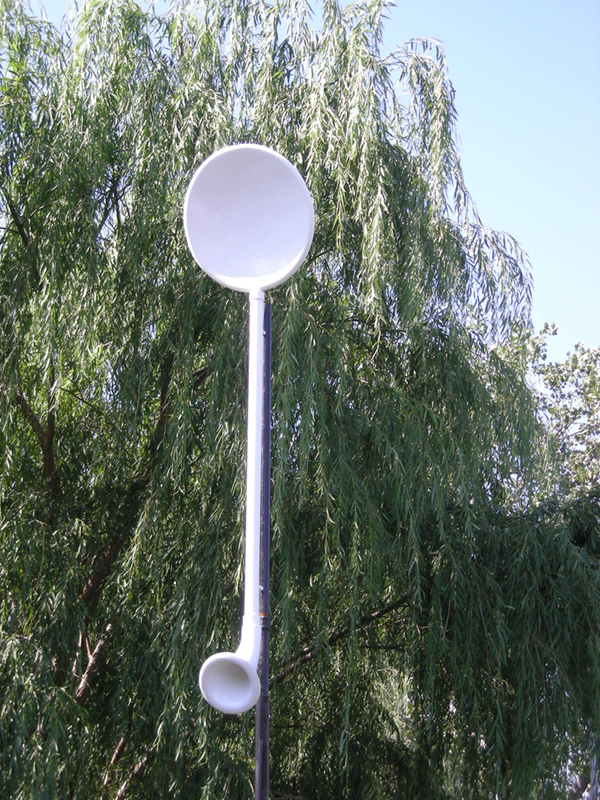 “Observatory” is an architectural structure built for the purpose of observing celestial bodies and equipped with telescopes and other instruments for their exact measurement. It is an interior place for looking at exterior space--the sky, stars, planets, galaxies, or constellations. “Observing” is an act of seeing, an ability to notice external phenomena with scrutiny, but it is also an act of cognition or internal reflection.

Barbara Westermann’s new body of work–Observatory–refers to both a place for observation and a space for inner contemplation. Divided in three parts--Information Architecture, Architectural Sculpture, and Interior Architecture--the exhibition underlines the interrelationship between exterior and interior architecture, their public and private function, as well as the physical and mental experience of their spaces.

Information Architecture is comprised of two works: “Calling All Mermaids,” an elongated sculptural form that resembles a satellite dish, and “How to Make Pudding,” a video that plays on a 1960s television. While the oval top of the first sculpture, cast in white plaster, serves as a transmitter of information, the cone-like bottom serves as a receiver, hence alluding to an endless circulation of information. The black & white video with no sound has an eight-hour loop, showing a continuous bubbling reminiscent of ever-changing moonlight, and producing a melancholic, pensive mood.

Architectural Sculpture includes three sets of relief: two diptychs called “Latvia” and “Potsdam,” and one triptych called “Leipzig.” Cast in white plaster, their abstract surfaces resemble musical scores, while their titles refer to the cities and regions in Europe that exist for the artist only through imaginative recollection of her grandparents’ stories. Simple and orderly, they are meditations on unseen landscapes or cityscapes, an unknown past, and yet unlived histories-- personal and collective.

Interior Architecture consists of everyday objects--three spoons, three vases, and three small connectors–made of white plaster and displayed on a shelf, and three pillows with embroidered words in German or English, alluding to physical and spiritual healing (Butterblume or buttercup, Loppewebbe or spider web, and Melancholie or melancholy), all neatly placed in a glass vitrine. Grouped together, the objects suggest a domestic environment, a sheltered place of privacy and seclusion, which although spare and anonymous radiate with quietude and intimacy.

In this new body of work, Westermann continues to work in the tradition of conceptualist “social sculpture,” which had a great impact on her formative years during the late 1970s and the early 1980s (Joseph Beuys and Daniel Spoerri were her teachers). In this respect, Information Architecture became a signifier of the channels of communication and a link between an individual and the world, Architectural Sculpture became a marker for that which is exterior, a façade of a building, or a public space of social interaction, while Interior Architecture became for her a symbol of private space, physical and mental.

Like in her previous work, in Observatory, Westermann adopts the vocabulary of minimalist art, using elemental abstract shapes, but at the same time she goes beyond the minimalist rigid, impersonal character. Instead, her work keeps its orientation toward some narrative or poetic contents, which although never explicitly conveyed is suggestive of a range of moods and sentiments. Moreover, by choosing the color white for all her pieces, she recalls the modernist notion of purity of forms and materials by which the matter is transformed into spirit. It is this contemplative quality that gives Westermann’s work a special power, referring back to the meaning of “observatory” as a place for observation and contemplation.