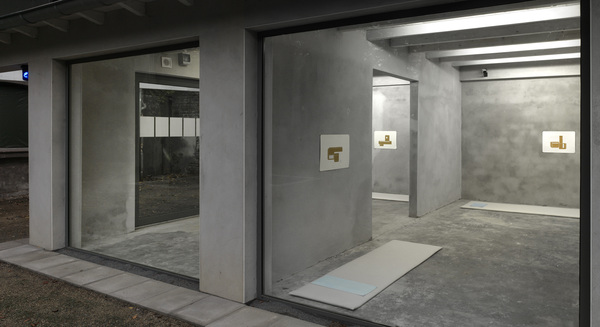 Sculpture and Data: History, Function, and Invisibility in Architecture

“I take data from real life and transform it into art. It is a pleasure for me to integrate science and reasoning into the creative process of my art making. This process is multi-layered, structured and unstructured, and highly intuitive.” Clearly interested in crossing the boundaries between art and life, Barbara Westermann – in her sculpture, work on paper and installation – responds to information drawn from a range of human environments, including architecture, urban planning and socio-political history.

Westermann’s new work that evolved since 2012, Relief Camp – Camp David, encompasses a series of three interrelated projects around the physical structure and conceptual meanings of Camp David, the country retreat for the President of the United States, also known as a seat of international government summits, place of negotiations and peace talks.

Deconstructing actual floor plans of Camp David that she found on the web, Westermann initially developed a series of woodcuts, printed on Rives Heavyweight paper at Clay Street Press. Through processes of appropriation and abstraction she addressed the idea of a refugee camp and of the double meaning of the word “relief,” creating new plans of a virtual relief camp that are materialized in the media of actual relief prints.

While Westermann’s playful arrangements of clear-cut geometrical shapes and clean muted tones of brown and blue allude to modernist architecture, they essentially become new autonomous structures, schemes of imaginary buildings. Camp David, a real site, defined by its history, function and architecture, evolves into a new matrix for a hypothetical but universally valid place.

Subsequently, Westermann integrated these utopian prints into a sculptural installation at Malkasten Düsseldorf in Germany during a fellowship sponsored by Stiftung Insel Hombroich. Here, she posted copies of the United Nations Declarations of Human Rights, a base protocol for humanitarian emergencies, and she transformed the existing architecture of the exhibition pavilion analogous to refugee shelter cabins.

Taking over the impersonal exhibition site but making a home, she hung the woodcuts on the walls and carefully made beds underneath, out of hand-dyed pillowcases and hand-sewn covers and mats, thus defining personal areas. Obviously non-functioning, these sites nevertheless were clear symbols of places of to be peaceful, to rest, relax, and dream. Indeed, Westermann made visible the importance of humanness in architecture.

Employing domestic and feminine references, she also suggested the home as an anti-narrative to the male heroic character of politics. Westermann’s story though, is not so much one of individuals and objects but rather a signifier for general structures, a blueprint that holds innumerable references to humanity and its infrastructures: “ I am not so much interested in the personal story, but rather in the skin of homes. I see them as containers and structures, as a matrix.”

The idea of the matrix is also at the core of Westermann’s current project, Camp David Revisited, a series of Ukiyo-e prints or pictures of the floating world, realized at Druckwerkstatt (BBK, Berlin). Mastering the technique of Japanese woodblock printing, she created a series of monoprints of abstract infrastructures. Using the same geometrical shape carved into the woodblock but turning it and layering it, she achieved rhythmical compositions that captivate with their gradual transparency and translucent quality.

Infrastructure No. 0253, a print in black and shades of grey, evokes cross-sections of architectural plans: “I would like to bring to mind the brutalism and inhuman qualities of mid-century architecture, but also my love for cement and its aesthetics. I like to play with the idea of the grid and of urban structures.” Likewise, Infrastructure No. 5317, a print with luminous tones of blue, underlines her profound interest in the thresholds between architecture and humanity. The sheer beauty of its presence though transports it into a poetical realm, a utopian space where shelters keep us warm and safe and encourage imaginative growth.

Transformation is fundamental to Westermann’s art making. Her macroscopic view reveals the invisible – structures that comprise universal vocabulary and experiences. Contributing to our reading of the world, she offers a way of interpreting the competing verities of humanness that concern us.
Camp David